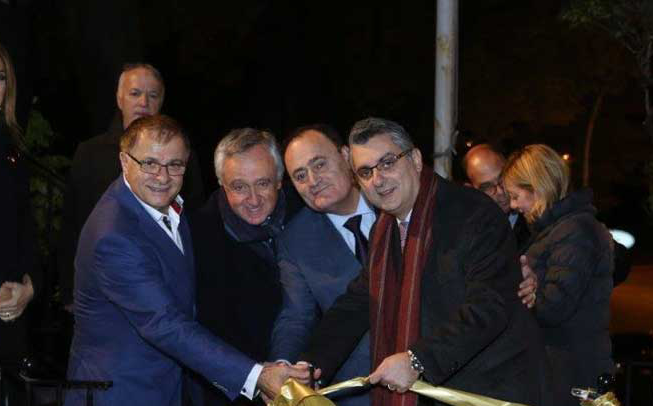 Unveiling a Monumental Sculpture “Addabic” (Lebanese folk dancer) to Mark the 50th Anniversary of the Lebanese Consular Presence in Quebec.

There is something new in Montreal. It is a mesmerizing Lebanese talent that sprinkles oriental magic dust in front of the Consulate General of Lebanon in Montreal. It makes pedestrians open their eyes wide with bewilderment and vehicles slow down abruptly.

Indeed, since November 4th, 2016, an impressive and majestic, five meter sculpture, designed and realized by the Lebanese-born artist Joe Jbeily, spreads out in grace and elegance.
The Consul General of Lebanon in Montreal, his Excellency, Fadi Ziadeh, organized the event and unveiled the piece of art.

It brought together prestigious guests and allowed the artist to present a range of artworks, in size and in color, exposed at the Consulate General of Lebanon.

The impressive sculpture, donated by the artist, was conceived to mark the 50th anniversary of the Lebanese consular presence in Quebec.

It represents a Lebanese folk dancer holding his head high with pride and captured in a beautiful movement. Monumental and majestic, made from fiberglass and covered with copper and bronze, it invites visitors to enter the eastern magic and get carried away by the joyous steps of the traditional dance of Lebanon. It is also intended to be rooted in the city’s heritage.

While working on this piece, Jbeily admits digging back in his memories for the rhythms that have cradled his childhood. Addabic is indeed an heir to Lebanese traditions. It is also an artwork that reconciles the one who left his native country with the one who chose another HOMEland.